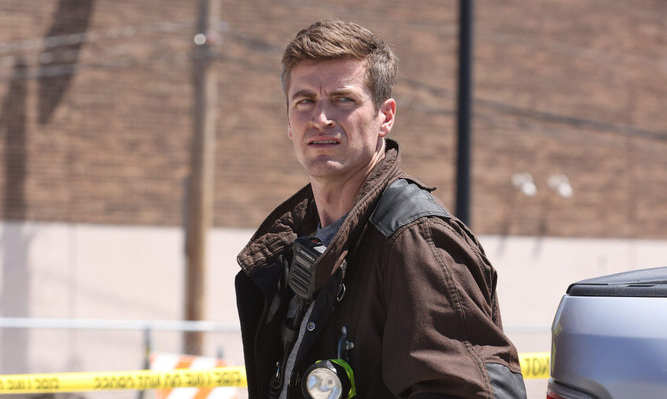 Jake Lockett is the hot new star of Chicago Fire and the longtime series’ showrunners are opening up about the mystery surrounding his character Sam Carver. Sam joined Firehouse 51 in the first episode of season 11, which aired on Wednesday night (September 21). Jake‘s character has a past with Stella, played by Miranda Rae Mayo. She’s clearly not happy that he has joined the firehouse! Click inside to read what the showrunners had to say about Sam Carver… There’s a mystery surrounding the scar on Sam’s arm and the showrunners opened up about it in a recent interview. “We know what it is. We’re gonna get into that,” Chicago Fire co-showrunner Andrea Newman told NBC Insider, revealing that we’ll eventually learn the story behind the scar. Andrea added, “Stella and Carver were rivals in school. There’s friction from the moment he arrives, and Boden has a reason for bringing him in over Kidd’s objections. We love this actor, Jake. He brings a lot to the character of Carver, who’s a mystery. We keep calling him a man of mystery with a lot of layers to peel back.” “What’s not a mystery is he’s a great firefighter, which is valuable to any rig in our group,” co-showrunner Derek Haas added. “But it’s all the stuff that goes beyond that. How you behave out of the firehouse, off-shift. Who you hang out with. Some of the darker places you end up in. All of this will be affecting Stella.” Andrea told TVLine that Sam is “a real mystery.” She added that the firehouse is “used to being so connected and [like] a family. So bringing in somebody who will play things close to the vest and is a really good firefighter and a really good guy, in lots of ways, but he brings in a lot of mystery to the firehouse that makes people start spinning a bit. So he’s going stir things up.” Andrea and Derek are raving about Jake as an actor. “We’re just huge fans of his. He brings a lot of presence and gravitas to the role, and he’s also funny,” Andrea said. “It’s that rare lightning-in-a-bottle thing we look for on this show, because we cross so many different genres, and so if you can do it all, that’s gold.” Chicago Fire has lost quite a few series regulars over the years. See every actor who has left the show!