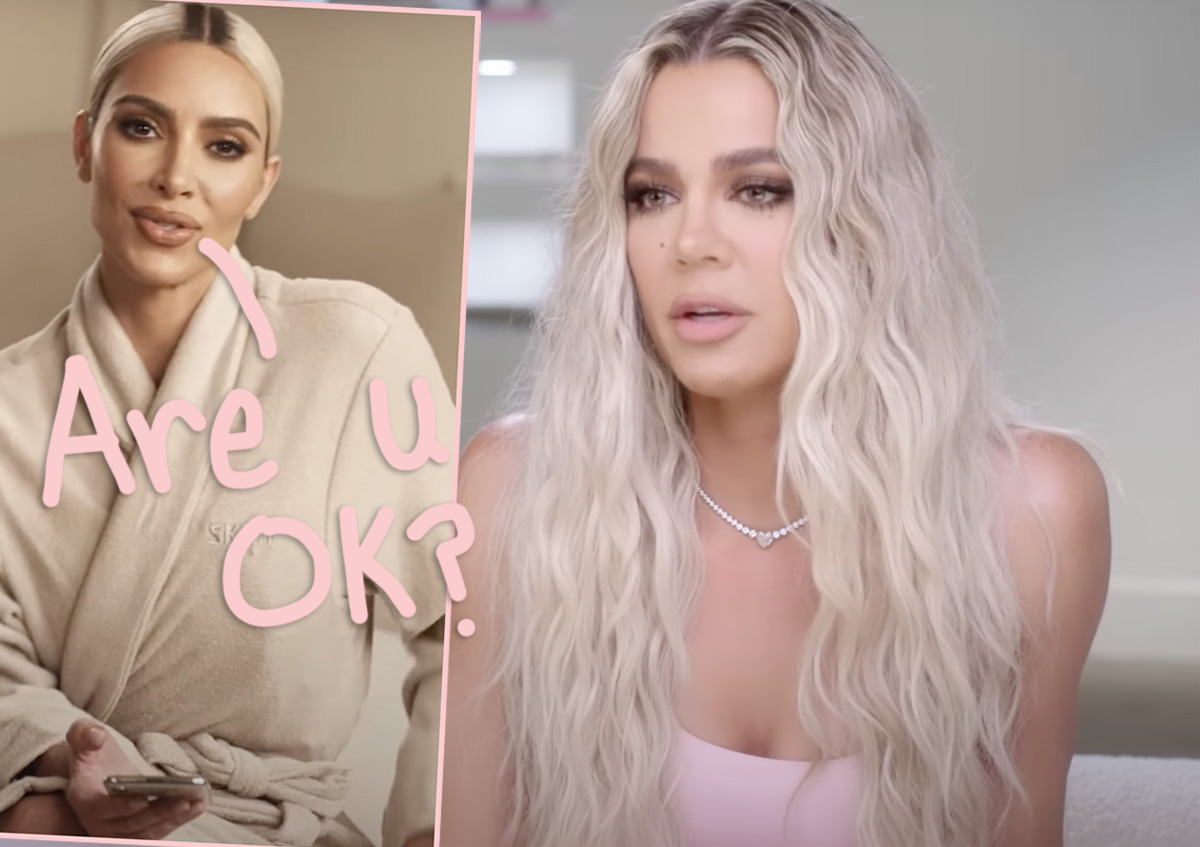 Khloé Kardashian‘s family just wants what is best for her. And in the second episode of Season 2 of The Kardashians on Hulu, Kim Kardashian took the opportunity to ask her little sis how things have been going on lately. Of course, KoKo’s storyline on the show has been very stressful — to say the least, so when the SKIMS founder queried, it all came tumbling out. Related: Khloé Reveals She Once Turned Down A Proposal From Tristan?! On Thursday’s airing, the elder KarJenner daughter broached the subject of Khloé’s appearance. It’s something that has been on the minds of fans recently, as well, and Kim picked up on that in the episode. Explaining how both Kendall and Kylie Jenner have supposedly sent Kim texts about how thin they feel Khloé has become, the mom of four said: “You look very skinny. I will say that Kendall and Kylie, not that I’m trying to out them, but they did text me and say that they were a little concerned for you, because you’re really skinny.” Oof. Immediately, Khloé tried to downplay the concern. She quipped about how it was ironic Kendall, of all people, would mention her look: “And Kendall said it, the model. Wow.” True, maybe, but Kim didn’t go for it. She noted that she’d explained to her younger sisters how the Revenge Body host was “a bit stressed” following all the upheavals surrounding Tristan Thompson. Kanye West‘s ex-wife defended the 38-year-old’s transformed frame: “I said, ‘No, guys, she’s fine.’ And I said, ‘You absolutely have every right to be concerned, but I’m telling you she’s fine.'” …Except she wasn’t, really. In a confessional, Khloé said the fallout from Tristan’s infidelity has been “incredibly hard.” She noted: “The hardest part about it all is training yourself to unlove someone. This was my life for six years. And we weren’t just a couple — we genuinely were best friends. He was my work out buddy. We did all these things together. And so learning how to undo all those things, that takes time. Just because someone does you dirty doesn’t mean you fall out of love with them instantly.” Seriously. (c) Khloé Kardashian/Instagram At this point, all we can do is hope Khloé keeps getting the emotional and psychological support she needs. This has not been an easy situation for her — or for those around her. But perhaps, it’s not up to Kim to decide who is “fine” — she’s an aspiring lawyer not a doctor. Plus, her weight loss has been the subject of speculation, so could this momma, who has her own stressors, be projecting about her own figure? Regardless, sending love and light! [Image via Hulu/Vogue/YouTube] The post KarJenners Are 'A Little Concerned' About Khloé Kardashian's 'Really Skinny' Frame appeared first on Perez Hilton.